You are here: Home / Law School Admissions / A Law Degree is Worth Over $1 Million. Can You Get it for Free? 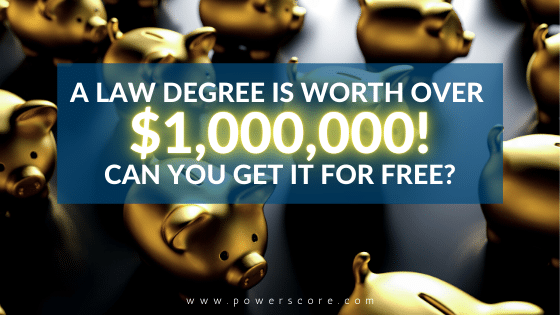 Breaking Down the Numbers

According to Law School Transparency, as of 2018, the average law school graduate carries $115,000 in student loan debt. To break that down, public law school graduates carry about $92,000 in debt and private law school graduates carry $130,000 in debt. This would all be fine, of course, if you were virtually guaranteed a six-figure salary after graduation. You are not. According to the ABA, nine months after graduating, only 57% of law students had full-time jobs that required passing the bar. For those lucky enough to have a job, the median salary was $60,500. Yes, the starting salaries in the private sector are higher, but your loans will still take up a good portion of that income.

As dire as this sounds, Seton Hall’s Michael Simkovic and Rutgers’s Frank McIntyre conclude that “for most law school graduates, the net present value of a law degree typically exceeds its cost by hundreds of thousands of dollars.” In other words, the amount of money law graduates make is, in most cases, far greater than the amount they would have made if they hadn’t gone to law school. According to Simkovic and McIntyre, “the mean pre-tax lifetime value of a law degree is approximately $1,000,000.”

Let’s say that again. One. Million. Dollars. So here’s an important question: can you get your $1M law degree for free?

Yes! It’s called merit-based aid. This is grant money schools offer to admitted applicants in the hopes that such applicants would forfeit offers of admission to other, generally more prestigious schools. Of course, there is a catch. Well, three catches.

How to Secure Merit-Based Aid

Let’s focus on the first question: how can you increase your chances of securing merit-based aid? Generally speaking, most schools, with the exception of Harvard, Yale, and Stanford, are likely to offer scholarship money to an applicant who meets all three of the following criteria.

As with all deals that seem too good to be true, a free ride at a top law school doesn’t come without caveats. This article examines more closely what those might be.