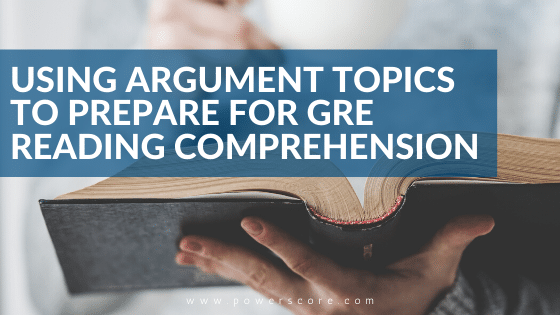 GRE Reading Comprehension passages often present arguments. By argument, we don’t mean a messy quarrel. In this context, an argument is an attempt to give reasons (premises) in support of a novel or debatable claim (a conclusion). Analyzing arguments is a crucial skill for Reading Comp. Luckily for you the makers of the GRE offer tons of free practice passages in the official pool of Argument topics for the Analytical Writing section. So, let’s discuss how to use these free passages to prep for the Reading Comp section.

Analyzing an argument means, at minimum, finding the conclusion and the premise(s). Either can be implicit; that is, hidden or unstated. On the GRE, you’ll likely need to find an implicit premise or two. Once you figure out an argument’s parts, you can analyze your findings fit together. Ask yourself, how much support do the premises give to the conclusion? False premises give none and true ones give at least some as long as they’re somewhat relevant to the truth of the conclusion. Fact-checking premises isn’t something the GRE has you do. You’ll never have to know whether some premise is or isn’t true. You only have to consider what sort of information could, if available, help or hurt an argument.

To illustrate, let’s break down an Analyze an Argument passage from the official pool of GRE Argument topics. Below is the first sentence of the passage along with the setup/context.

The following appeared in a health magazine published in Corpora.

There isn’t an argument just yet. Instead, the magazine excerpt opens with an observation about Corpora. The percentage of physically fit Corporans has fallen in the past two decades, according to medical experts. What’s the cause of this decline? It’s likely up for debate. The passage continues:

“… But these experts are mistaken when they suggest that spending too much time using computers has caused a decline in fitness. Since overall fitness levels are highest in regions of Corpora where levels of computer ownership are also highest, it is clear that using computers has not made citizens less physically fit …”

Now we have an argument. The conclusion appears twice: once between “but” and “since” and again after “it is clear that.” The premise follows the word “since,” which is often a premise indicator. Let’s restate the argument to make it clearer.

Imagine that what we’ve read is a complete Reading Comp passage. Our analysis so far prepares us for a question about the main idea/point/conclusion. It also helps with questions about the function/purpose of various parts of the passage, such as “is a premise.” You can describe the purpose of the very first sentence as “citing a statistic whose explanation is being contested.”

However, we have yet to uncover the argument’s implicit premises. For some Reading Comp passages, the test may ask you about the author’s implicit assumptions. We need to identify them for this Argument task passage. Here are the directions that follow the magazine excerpt about Corpora.

Let’s follow the instructions and examine the argument’s assumptions, especially the implicit ones. Here are at least two.

Be Mindful of the Directions

What if, as the essay directions ask, the argument’s assumptions are dubious? Well, then they’re not good reasons to believe the conclusion! While this answer is technically correct, it also applies to the premises of any argument. So let’s compose a criticism that targets just the argument assignment at hand.

The stated premise seems to assert that the percentage of physically fit citizens is highest in parts of Corpora where the percentage of computer owners is also highest. Even if this assertion is true, the decline in physical fitness across Corpora still could’ve been caused by excessive computer use. Perhaps the regions that the author cites are mostly elderly but, relative to their age, physically fit adults who own but don’t often use computers. Moreover, perhaps the given regions also have many younger but physically unfit adults who own and overuse computers. If so, then implicit premise #2 offers an unreliable test for the medical experts’ hypothesis, and the stated premise—again, even if true—lacks relevance to the conclusion.

Let’s imagine once more that we’ve been working with a Reading Comp passage. If they ask us to weaken the author’s argument, the correct answer can echo our description of the parts of Corpora the author is talking about. Alternatively, if they ask us to strengthen the argument, then the right response may be one that rules out our criticism.

The passage isn’t over. Here’s the final bit.

“… Instead, as shown by this year’s unusually low expenditures on fitness-related products and services, the recent decline in the economy is most likely the cause, and fitness levels will improve when the economy does.”

The magazine excerpt ends with a second argument from the author. See whether you can identify the argument’s parts, including the implicit premise(s), and come up with a criticism or two. By doing so, you’ll be preparing for both the Analyze an Argument task and various types of Reading Comprehension questions. That’s double the study mileage from a single passage that’s just one of many freely available from ETS.