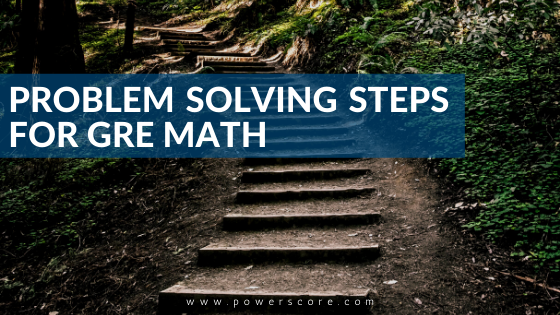 The GRE Quantitative section doesn’t just test your math knowledge. Above all, it assesses your problem-solving skills. ETS, maker of the exam, suggests some general steps to follow when solving quantitative problems. While a fairly new offering from the test maker, the three-step approach that ETS describes is based on a classic set of problem solving principles.

In the Official GRE Quantitative Reasoning Practice Questions, published in 2014, ETS proposes that a math problem can be solved in three basic steps:

Although ETS cites no sources, the test maker is adapting the work of mathematician George Polya (d. 1987). Highly regarded among math educators (including The National Council of Teachers of Mathematics), Polya divided the problem-solving process into four phases:

Each phase follows a basic principle of problem solving. ETS combines Devising and Carrying Out in a single step and reduces Looking Back to checking your answer rather than, as Polya encouraged, reflecting on your solution—an activity that’s important when practicing but impractical when testing.

No one gets good at problem solving by just talking about it. You have to spend lots of time doing it. So here’s a problem for practice.

Ready for the Polya-style breakdown? Here’s how the four phases of solving this problem might shake out.

You’re challenged to find an unknown. What’s unknown is a distance traveled, and what’s given are constant rates, along with the condition that the travelers leave at the same time from opposite ends of parallel paths that are equal in length.

Sounds like you have some algebra to do. More precisely, you have a distance word problem to solve. You also have a list of distances (the answer choices), one of which must be the unknown. That list may come in handy.

There are at least a couple different ways to approach this problem. One way is to Translate Words to Algebra, Use a Formula—namely, distance = rate × time—and Solve an Equation. Polya wrote about each of these strategies, and ETS talks about all three, too. You probably practiced these sorts of mathematical maneuvers a lot in junior high and high school.

Another approach is to Solve a Simpler Problem and Adapt the Solution. (ETS and Polya would likely lump this strategy in with Adapting Solutions to Related Problems.) You can also Analyze the Answer Choices to try to exploit the multiple-choice format. We’ll do both: we’ll adapt the solution from a simpler problem and then we’ll analyze the answer choices. We’ll also throw in a little translation.

Carrying out the Plan

Since S and T leave at the same time, they’ll have been moving the same amount of time when they meet each other. They’ll also have gone a combined 450 miles, since they start 450 miles apart.

Imagine S and T are traveling at equal constant rates. When the two trains meet, S and T will have traveled equal parts of 450 miles— 225 miles each. So the solution to this simpler, equal rates problem would be choice (B).

In this final phase, you want to at least follow ETS’s advice and check your answer. Here are some questions to ask yourself.

Everything checks out. Interestingly, calculation errors don’t really threaten our solution, since it’s more about higher-level quantitative reasoning (which GRE Quant aims to measure) than lower-level calculations. And that’s worth reflecting on.