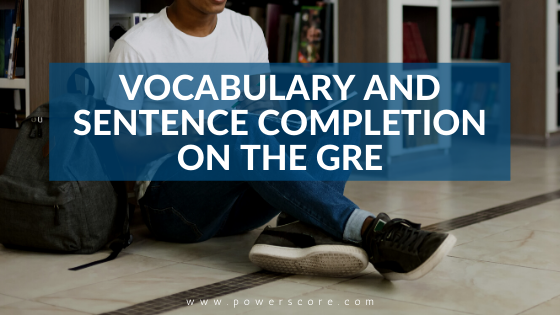 Let’s be honest, no one can memorize all the vocabulary you might encounter on the GRE. Most of the lists of “GRE words” are just “SAT words” on steroids. Prep books frequently instruct students to keep a vocabulary diary, make flash cards, or read at a higher level to expand your working vocabulary and familiarity with the scholarly/academic jargon. All that is great advice! By all means, read more and keep track of words you learn. It will serve you well on the GRE, in grad school, and in life in general.

Fortunately for those of us who struggle with difficult vocabulary, the GRE has become less vocabulary intensive than in the past. When I first started teaching GRE prep, the test included Antonyms and Analogies problems, both of which were pretty much make-or-break vocab questions. If you didn’t know the definition of the words, you could employ strategies and logical deduction to improve your odds of getting the answers right, but you could never really be sure.

While the test now includes fewer problems that are outright vocabulary questions, Sentence Completion and Sentence Equivalence problems still require a strong working vocabulary. Reading Comprehension does as well, but in more of a passive sense. A great knowledge of the definitions of difficult words still helps a lot, but let’s discuss what to do when you’re stuck on unfamiliar language. Let’s take a look at a hypothetical sentence completion problem.

Step One: Take a Look Around

Read over the stimulus to get an idea what’s going on. Remember that each blank will have independent evidence in the passage to support its meaning. Pick the one you want to begin with.

Let’s do these in order. By all appearances, blank (i) looks like a good place to start. In context, what does the blank mean? Well, we have to be “completely” something. Completely what? Let’s take a look. There’s an issue: we don’t know what “accede” means. Here’s our first vocabulary difficulty. Should we freeze up? No way. Let’s use context clues to break this situation down.

“If we wish to be completely something, we would have to […] that ceviche — “

Wait, now we have all this parenthetical stuff in between the dashes. Skip over it. That’s blank (ii) city. We’ll deal with that in a second. Back to business:

Now we have enough information. Ignore the word “accede” and work with the context. How do we have to be? Well what makes sense for that other word we don’t know? Maybe we have to say that ceviche is in fact uncooked. Does anything else make sense instead of say? Maybe admit. That’s about it. Forget the word “accede” and deal with the meaning in context. Let’s put together what we have so far:

“If we wish to be completely something, we would have to say that ceviche — […] — is in fact uncooked”

Now let’s do the blank. What would we have to completely be if we needed to say that ceviche is uncooked? Next line:

“After all, by definition, to cook something requires the use of heat.”

So we have to say that ceviche is uncooked because it doesn’t fit the definition of cooking. Well I guess we would have to be completely honest! There’s your word that describes the meaning of blank (i).

Compare your word to the options.

Step Four: Repeat with the Other Blanks

“However, it would be a mistake to conclude that just because ceviche is not cooked, it must be raw. The acid itself (iii) _______ the dish by producing heat and altering the chemical nature of proteins in the seafood.”

So, “it would be a mistake to conclude that just because ceviche is not cooked, it must be raw.” The acid does something to the dish. What does it do? It produces heat and alters the chemical nature of the seafood. So what is this something? It changes the dish. Getting our meaning was reasonably straightforward. Let’s see whether we can match.

Here’s where the rubber hits the road. Could you pick (A)? Perhaps, but you know that “infuses” seems like the best possibility here. Why does it seem that way? Because ETS makes it appealing. They know you might not be up to speed on the word’s definition, but they’re hoping that you just say “close enough!” and pick it. But, “close enough” isn’t good enough! This is a maybe answer, but not quite. Classic trap.

That leaves you with (C). Does “cures” mean “changes”? This is where you have to get out of your comfort zone. The comfortable answer on these difficult questions will often be incorrect. (C) is the correct choice.

Coming back to blank (ii), we now have to describe what this acidic marinade is.

Well, it’s some kind of “marinade” made up of “vinegar or citrus juices.” What else do we know about it?

“The acid itself changes the dish by producing heat and altering the chemical nature of proteins in the seafood.”

Three for Three and Minimal Vocabulary

What I’ve illustrated here is a kind of worst-case-scenario. Lots of difficult vocabulary both in the stimulus sentence and answer choices. No one wants to be in this position, but the lesson here is that there are tools at our disposal. We can strategically engage with the sentence, the blank, and the answer choices to focus on which answer choice is likely the best match for the meaning of the blank.

There’s no substitute for a strong vocabulary, but even with a strong vocabulary you need to be precise and strategic. The GRE wears you down. You get bored, do something stupid, and ETS has got you. So, focus! Be tactical and smart. Do all the good vocabulary-building advice enumerated at the top of this post, but remember, you’re never out of luck. You can give yourself an odds-on chance of getting even the most difficult problems right if you’re strategic about them.