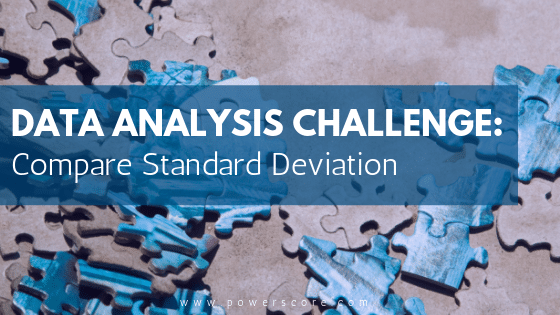 GRE data analysis includes some tough Quant topics. One is standard deviation, a measure of how far the values in a data set tend to fall from the set’s mean. This statistic can be confusing and tedious to calculate. Luckily, you probably won’t need to calculate it when it comes up on the exam. Try this hard standard deviation question to see what I mean.

In The Practice Book for the Paper-based GRE, a hard Data Analysis question shows you two histograms—bar graphs of frequency distributions—and asks you to compare their standard deviations. (See §5, 8.) When the question was on a real exam, not a lot of text takers got it—just 27%. Here’s a similarly difficult problem.

The frequency distributions shown above represent two groups of data. Each of the data values is a multiple of 10.

Now contrast the two groups. You see their distributions are flipped. Distribution A skews left toward the lower values, whereas distribution B skews right toward the higher ones. Consequently, the averages differ. Group A’s average is lower than Group B’s.

Distributions A and B have the same spread and thus the same standard deviation. Again, the direction or skew of each distribution differs, with A pulling left and B pulling right, but this difference affects the size of the mean, not the distance that values tend to fall from it.

Thus, the standard deviations of distributions A and B are equal. The correct answer is (C).

Ready for more? Check out some of the Hardest and Most Tested Math Topics on the GRE.