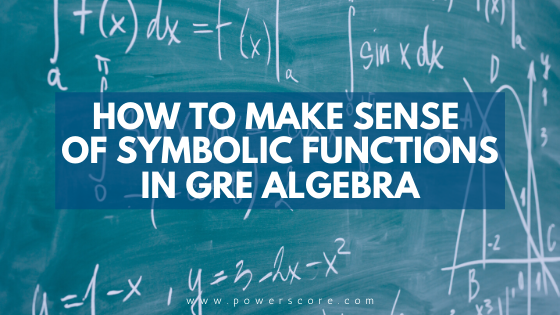 GRE algebra can get weird sometimes. Strange markings like  ⧫  or  ⊛  will appear in equations that otherwise use ordinary operators like  +  and  −. Unusual symbols in GRE Quant are the hallmark of symbolic functions—pairings of inputs and outputs that, as it turns out, are connected by some pretty standard math.

Symbols in math problems tend to signify a single operation. For instance,  +  means add,  ×  means multiply, and  √  means find the square root. But the special symbol in a symbolic function doesn’t refer to an operation; it just lets you know that you’re looking at a function. Meanwhile, the math you’ll need to do will be declared in the usual way—that is, with pluses and minuses and the like. Here’s an example.

Think of doing a function as running a little mathematical machine. This machine takes inputs (numbers or expressions) and makes outputs (more numbers or expressions). There’ll be a placeholder or two for inserting some input and a set of instructions for calculating the output. Once you have some input, just stick it in and follow the instructions.

In the example, the ★ tells you it’s function time. The variables x and y are the placeholders, and all those familiar operators telling you to square, multiply, and subtract are your instructions. When you get 4 ★ 8, you know to replace x and y with 4 and 8, respectively, and then do the arithmetic.

So the correct answer is (C).

Functions get harder when the inputs are expressions. Expressions include variables, so you won’t be doing just straight arithmetic when you run one through your function. Still, the basic workflow remains the same: plug in inputs ⟹ follow instructions (multiply, divide, etc.) ⟹ savor outputs. Here’s another example problem.

So the right answer is (D). The wrong answers all result from distribution errors. For instance, say you didn’t use parentheses. You’d fail to fully distribute 7 and −3 and end up picking (B).

Alien as they might appear, symbolic functions end up being familiar algebra and arithmetic. The part that’s most likely to throw you is placing your inputs. Remember: match inputs to placeholders by position (left or right of the symbol) and, in you case you need to do any distributing, enclose the inputs in parentheses. From there, you’ll be back to using ordinary symbols and standard operations.