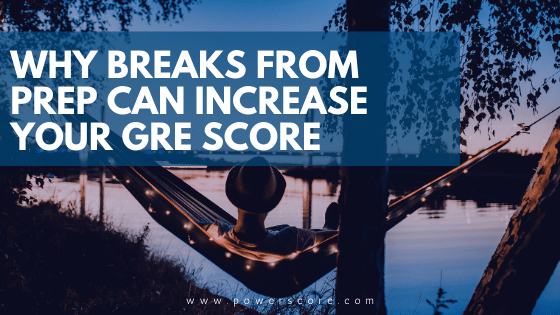 If you’re studying for the GRE, make sure to schedule several breaks! Anywhere from a few days to a few weeks depending on your overall time frame. At first glance, this advice may seem counter-intuitive. To increase your score, you should plan to not study? Yes! Here’s why.

Not an Ordinary Exam

Studying for the GRE isn’t like studying for a traditional History or Math test. In those exams, small universal details and rote memorization play a big role. Taking breaks from studying these types of tests may allow you to forget a date or formula which could cost you questions on the exam. The GRE, in contrast, is a process and concept test. It tests your understanding of the big picture ideas in play.

In other words, even though the GRE requires you to be able to memorize a handful of tools such as vocabulary and a few formulas, the real key to success is your understanding of constructs and structures they consistently test. Much of GRE preparation is about abstract concepts and techniques. To absorb these ideas and apply them seamlessly, you need to be able to place these elements subconsciously and situate them properly for instant recall. This takes time! It’s one big reason you can’t cram productively for the GRE. It also means that taking breaks from studying can help. Breaks allow your mind to keep processing the ideas and integrating them into your analytical structures.

While taking short breaks is always good, four specific groups of test-takers can benefit from even longer breaks of up to several weeks.

If you have a long-term study plan you must include a few lengthly breaks in your schedule. Students who have intense study plans often feel like any break will jeopardize their progress. It’s actually quite the opposite because not taking breaks can lead you into the next group on the list.

What is GRE burnout? This is what happens when you study for so long and hard that you literally get sick at the thought of seeing another GRE question. If you’d rather gouge your eyes out rather than study more, you’re a victim of the burnout. While most people don’t reach this phase, it can be super frustrating for those who do. These students see huge benefits from taking a long break. It gives you a chance to recharge and return to your prep refreshed. Oftentimes, these students return several points better than where they left off.

When, despite a consistent study plan, your score fails to increase, you’re liking hitting a score plateau. While it’s especially common for students experiencing GRE burnout, it also happens to the majority of test-takers. There’s a variety of different causes for this problem, but typically the remedy is a break from studying. It’s one of the most overlooked tools at your disposal. A break alone often yields the push you need to break out of that plateau. Now, if you’ve only been studying for two weeks, don’t take a month off. Make sure to vary your break in relation to how much you’ve already put into studying.

If you’ve been out of school for a while and simply aren’t used to extended periods of studying, breaks are your best friend. It’s been a while since you’ve been in an academic setting! As with anything else, the longer you step away from something, the longer it may take to get back into the swing of things. You’ll need to build back the endurance and concentration necessary to push yourself for an extensive period of time. Quit the gym for a month and you’re sore the first few times back; quit the gym for years and you’ll barely remember how to use the equipment. Ease into it slowly and plan for occasional breaks as you re-train your mind and body to be a test-taker again.

So, go ahead and take a brief vacation from the GRE now and then. You’ll often find that when you come back, you are actually better than you were before. When people ask why you aren’t preparing for the test, just tell them you are—subconsciously!