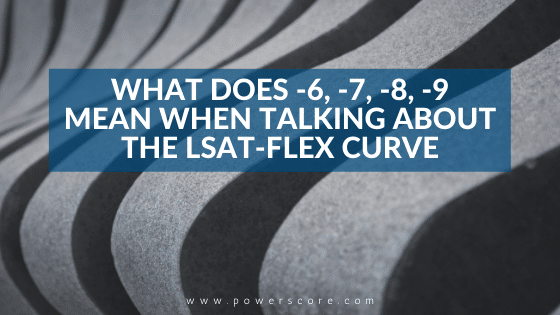 The shorthand reference of -6 to -9 refers to the number of questions you can miss on an LSAT-Flex to obtain a score of 170. It’s also a reflection of general test difficulty. Harder LSATs allow you to miss more questions whereas easier exams require you to miss fewer questions.

After every LSAT-Flex, there is a discussion of the relative difficulty of the test. You often hear numbers such as -7 or -9 thrown around as indicators of the LSAT scale. These numbers  refers to how many questions you can miss to score a 170. Historically, “regular” non-Flex LSATs allow test-takers to miss anywhere between 8 and 14 questions to receive a 170. So, the number people discuss directly refers to the score of 170 on those tests. But, since the LSAT-Flex has about a quarter fewer questions, the reference number for a 170 has to be adjusted, and that’s where we get the -6 to -10 range for a 170. But why is the number of questions missed for a 170 a useful reference in the first place?

The top of the scale typically measures the overall difficulty of an LSAT. The hardest questions each have a significant effect on scores. A single incorrect question in the 170+ range often translates into dropping a point on the scaled score. Thus, the number of questions you can miss to obtain a 170 is often an indicator of the top-level difficulty of the exam. Therefore, a scale that allows you to miss 10 questions (-10) on an LSAT-Flex allows more room for error than an exam that only allows you to miss 9 questions (-6).  However, having a scale that is “looser” isn’t automatically good news.

Test makers seek to have each LSAT-Flex form yield similar results. So, if an LSAT-Flex is inherently harder from a pure difficulty standpoint, then they loosen the scale as an offset. This means you can miss more questions to get a 170. On the other hand, if the test is inherently easier, then they tighten the scale to counterbalance that. For example, with a -6 scale, the test was easier overall in comparison to a scale that was -8. This leaves very little room for careless errors. And those apparently generous looking -9 and -10 Flex scales? They accompany tests that have some extremely difficult questions on them, meaning the scale is loose only because the difficulty was also very high.

So, what’s the best scale to get?  It’s often thought that scales in the middle are “safest,” since you avoid truly killer high-level difficulty exams as well as the supposedly “easy” exams that leave no room for fatigue or accidental mistakes.  But, the real answer doesn’t lie in the scale, but in the composition of the test itself, which changes throughout the day for each LSAT-Flex.