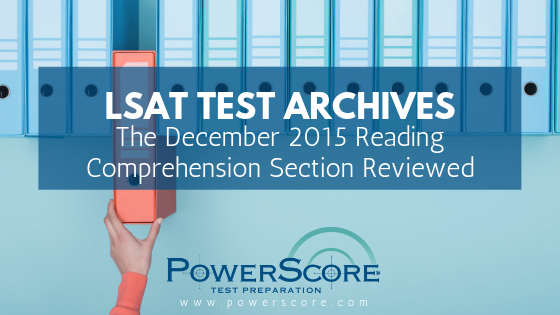 The December LSAT has just been released, and the Reading Comprehension section, as always, provides an interesting set of passage types, topics, and question types. The first two passages that comprise the first half of the section are relatively straightforward, while the second half, which includes Comparative Reading, is considered by many to be a bit more challenging. Passage types include Diversity, Law, Humanities, and Science, and overall the section features a common mix of questions, with the vast majority falling under the category of Must Be True, several standard Main Point questions, and  a few less common Reading Comprehension question types, including examples of both Strengthen and Parallel Reasoning questions.
Opening the section is a passage about the Federal Theater Project of the 1930s, which may have been the first truly national black theater in America, and included groups focused solely on producing African American plays for mostly African American audiences. The author provides that the groups overcame external challenges, including racism and bureaucracy, as well as the internal debates about a familiar issue in Diversity passages: whether to try to blend in and become more mainstream, or to focus more on highlighting their differences. The language and themes here are quite straightforward, as are the questions that accompany the passage.
Second is a Law passage that deals with the proper punishment for corporate crime. Some make the basic argument that the penalty must simply outweigh the crime, as when a six million dollar crime leads to a seven million dollar penalty. Based on the fact that many corporate criminals get away with their crimes, however, the author suggests that crime detection ratios must be considered in assessing proper penalties; a one-in-ten chance of being caught for a six million dollar crime, then, would lead to a 60 million dollar penalty when caught. But, the author notes, that is not an ideal solution either, as such enormous penalties would likely put corporations and many jobs in jeopardy. Thus, the author concludes, in order to find a solution that is both just and practical, some third criterion (such as an assignment of moral weight to various crimes) must be considered in addition to a basic cost-benefit analysis. A student who understands this conclusion, as well as the perspective of the economists discussed, would likely do well on the questions that follow the passage.
Next are the Comparative Reading passages. Passage A deals with the study of history during the 1990s, and the shift in focus, “from the study of women to the issue of gender,” and how such issues can shape a society’s culture and politics. The author closes by questioning whether a focus on underlying political and social structures might mean less focus on “the particular ways in which women engaged in their worlds.” Passage B also deals with the politicization of women’s perceived role in society, specifically in ancient Rome, where Augustus focused on women as wives and mothers, and attributed the peace and stability of the time to the integrity of the Roman family. Many students found these passages to be a bit more challenging than the first to passages of the section; beyond that, a strong performance on the questions requires a solid understanding of the relationship between the passages as well (as is generally the case with regard to comparative reading).
Presented last in the section is a Science passage about Jean-Baptiste Lamarck, and his theory of evolutionary change that predated Darwin’s work by half a century. Baptiste hypothesized that in adapting to their environment, organisms change and pass along newly acquired characteristics to their offspring, an idea that’s been dismissed by modern most biologists but may be supported by recent evidence offered by a molecular immunologist named Edward Steele. In response to new diseases, some immune system cells have the ability to mutate, as when a cell’s DNA is transcribed into RNA. RNA has been observed changing into DNA in other contexts, and Steele suggests that this process could allow the new DNA to be carried via reproductive cells to the organism’s offspring. Specifically, Steele suggests that a virus could carry the altered DNA to an organism’s reproductive cells, but the author questions whether this ever really happens; such evolutionary mechanisms cannot be observed directly, and the author notes that other biologists say that there could be “less radical explanations” for the referenced pattern of mutations. Students who are not fans of Science in general were probably not converted by this passage; for those who tend to get caught up in scientific or technical terminology, this could have been a fairly challenging passage set, particularly considering that it is accompanied by eight questions (nearly a third of all the questions in the section).