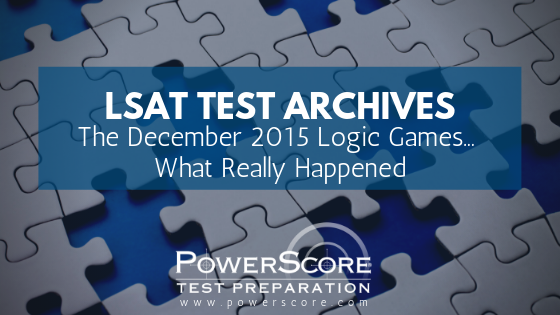 December LSAT scores have finally been released, and test takers are now getting the opportunity to analyze their results. With the test in hand we’ve gone through it and are putting together summaries of the Logic Games, Logical Reasoning, and Reading Comprehension sections, so you can compare your analysis to ours. We’ll even have a post on the December 2015 scoring scale (spoiler alert: it was a pretty average LSAT, games included as we’ll see below).

Of course, if you’re anything like me then the Logic Games section is the first thing you’ll review, so let’s take a look at each game and see exactly what happened:

This is a Balanced Linear game, with six variables ordered into six spaces. The six times serve as a base, and create a fairly straightforward game with one minor wrinkle: they’re divided into morning (9, 10, and 11) and afternoon (2, 3, and 4), so it’s critical you recognize that division.

The four rules are all pretty simple, with the WY block creating the majority of the inferences (including the critical truth that Y must go in the afternoon, and W can be no earlier than 11 am) and even allowing for the creation of three templates:

In short, a surprisingly simple game, and a great start to the section!

You’ll notice from the label above that the second game had both Linear and Grouping elements, however it was the Grouping aspect that really controlled this one. Specifically, we have an Unbalanced (Overloaded) Grouping setup, with 8 potters contributing 6 ceramic bowls to a display. Fortunately we can turn this unbalanced scenario into a balanced one by showing two spaces for our “out” group of non-displayed bowl makers (one of whom must be L or M).

The critical inference here involved the positioning of P, in that he or she was surrounded by O and S, meaning that not only could P not go in 1 or 6, but both O and S have to always be displayed: with either O or S out, then P would also be out, and those two plus one or more of L and M doesn’t leave enough candidates for inclusion. That directly answers question 11, and is helpful elsewhere, as well.

Unsurprisingly given how few inferences result from the all-conditional rules, nearly every question is Local, providing you with additional information to allow for deductions to be made. Realizing that P, and particularly its relationship to S’s restrictions on 2 and 4 (so P cannot be 3), is a powerfully restricted variable is key deduction here, and made even more dominant if you focused on the “out” group and its one remaining position after either L or M is removed.

This was a great game for test takers willing to move to the questions without spending (wasting) too much time hunting for inferences at the outset, as those inferences are few and far between, and the Local nature of the questions provided all the information needed to quickly gain points.

At this point in the section, most students were feeling good: two games of slightly staggered difficulty–I’d argue that the second was more challenging than the first–but nothing a prepared test taker should’ve been caught off guard by. The first game in particular was such a golden opportunity to gain some easy points and stockpile time that, barring some sort of serious miscalculation, people should be cruising. Looking ahead, and knowing we’ve seen a Basic Linear and a (primarily) Grouping, the expectation should be that an Advanced Linear is on the horizon…but instead we get the oddity that is game 3.

Ahh, and so we arrive at the moment many test takers saw their dreams come crashing down. Alright, that’s a bit exagerrated (I hope), but this game certainly caused more trouble than anything else on the December exam.

Before I delve into the specifics, let me point out that Pattern Games have now made an appearance in two consecutive years, with the June 2014 LSAT marking their, admittedly still sporadic, return. We’ve talked about that test and Pattern Games in general previously, so I’ll presume some knowledge of the broad strokes on the part of the reader.

What we’re told in this instance is that four employees are ranking four offices from first (highest) to fourth (lowest) based on preference. And that’s…well that’s about it. The rules specify that each employee selects one office that hasn’t been selected by someone else, and that office is that person’s highest ranked among those remaining. But for test takers looking to create a robust and inference-heavy setup there was exceptionally little to be done. In fact, about all that could be done at the outset was a quick analysis of any trends among the rankings, which, loosely, shows that Z can’t be first or last, and W is generally ranked lower than the rest.

But that’s okay! The key here was to get to the questions very quickly, and use the broad rules to determine rankings, and answer choices, as you go.

One often helpful strategy if you’re struggling at first with Pattern Games is to try a few hypotheticals, so let’s do that here and see what they look like.

Imagine this randomly-chosed order for the people: L, T, P, J. What offices would that order select? L goes first so L takes X, her highest ranked office. Next is T, who takes Y since X is already taken and Y is ranked 2nd by T. Then P who takes Z, her second ranked office (Y is taken). And finally J is left with W, the only office left (and the lowest ranked by J…sucks for J). So you’ve got L=X, T=Y, P=Z, and J=W. That doesn’t have to happen, of course–it’s only a hypothetical, after all–but it illustrates how the pattern operates.

One more? One more. What happens with the order as P, J, T, L? P takes Y, J takes X, T takes Z, and L takes W. Different order, different assingments, but again you can see how the pattern plays out.

Now to the questions. Interestingly, for a game with nearly zero setup, four of the five questions are Global, meaning the answers are really all you have to work with. That’s brutal, but given how little time you should’ve spent in creating a diagram, at least you’ve got some extra clock on your side.

Let me walk you through one to show you what I mean.

Take question 17, for instance. A Global Must Be True question, so again the answer comes directly from the pattern created by the rules and not from any additional information provided. So how do we arrive at (E)? We eliminate, both from prior work (hopefully) and from quick deductions in the answers (definitely).

(A) is out because J can get X (see my second hypothetical above).

(B) is out because L can get W (again, my second hypothetical up there demonstrates this, conveniently).

(C) is out because L can get Z: if T is first and takes X, and L is second then L takes Z.

So we’re left with (E), where P cannot get X. Why not? If P goes first then P receives Y. P second could get either Y (following L or T) or Z (following J). P third gets Z, as no combination of two prior people could take P’s Y and Z as their 1 and 2: say J gets the Y first, at which point both L and T would get an X, regardless of who’s second. And P fourth gets W, since the other three offices would be taken. So no matter how you arrange it, P can never get X!

That’s a tricky thing to spot up front, but by moving to the questions and working to simply eliminate answers you can still make your way through this game without the issues a lot of unfortunate (read as: less prepared) people faced.

The last game is another, in this case more traditional than game 2, Grouping game, making this LG section something of an outlier for its lack of Advanced Linear. Of course, the real curveball was the previous game, but in total this section had a few twists.

Here we can use X, Y, and Z as our base, and label the three spaces above each with L, S, and T for the three positions held.

With only five people to place in those three spots, options quickly grow limited as restrictions come into play, such that we eventually see that the following is true of the three committees:

In X, we must have H, K, and N, with N as the leader. We know this from elimination, since J cannot be assigned to X (a rule) and M can only go once and is in Z (see below).
In Y, we have J as the Secretary (a rule), and K as either the Leader or the Treasurer (also a rule).The remaining variable is either N (as the Leader) or H (in whatever spot K doesn’t take). Again, M is prevented from going in Y because its single usage is in Z.
In Z, we can rule out J (a rule) and K (another rule), meaning the three Z spots must be occupied by N as the Leader, H, and M in its sole position. We don’t know exactly what H and M do in this group, but knowing the constituents is an extremely helpful insight.
You’ll note how powerful it is to focus on the eliminated variables in this game–much like in game 2–as they dictate who’s left to be placed and, in cases of extreme restriction, can tell you precisely who goes in what group.

23. The rule being replaced here is the one limiting M to a single usage, so begin by thinking about that rule and its implications: M is used exactly once, and thus must be in Z, and not in X or Y. What else might force M to go in a single committee, which would then have to be Z (remember that J and K can’t go in Z from other rules, so Z gets H, M, and N)? If M had to be used fewer times than a variable used twice! And what variable goes exactly twice? K, in committees X and Y. So an answer telling us that K is assigned to more committees (2) than M, means M goes once and is back in Z as it was when the original rule was in play! A tricky question to end this section, but for prepared students it wasn’t too bad.

Ultimately, December 2015’s Logic Games were tough, with the “hardest” game, game 3, presenting difficulty in large part due to its rarity. Fortunately, for prepared test takers (our students most certainly among them), nothing here was insurmountable–success on this test, like every LSAT, is entirely within reach, and depends completely on the tools you’ve used to prepare.