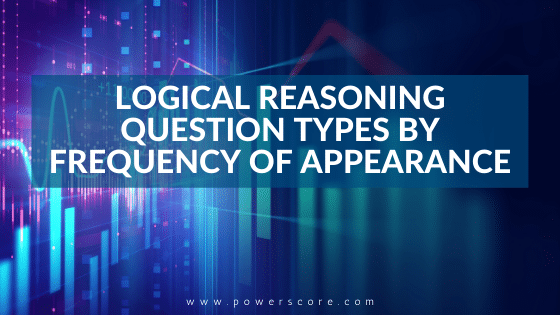 The June LSAT is now 60 days away, and it’s inevitable that people will wonder how to best prioritize their study efforts. To aid in that, I’ve analyzed the past 18 months’ worth of released LSATs (back to October 2015) to see exactly what Logical Reasoning concepts the test makers have emphasized, and what they’ve relegated to a back shelf. After all, if you know the trends on the most recent exams then your own test day holds a lot less mystery.

This post is intended as a continuation of a prior frequency breakdown for LR questions from June 2013 through June 2015, the results of which can be found here.

To start, there are thirteen question types that we recognize in Logical Reasoning, listed in (very) rough order of historical appearance frequency:

Each of those types describes a unique relationship between the stimulus and the answer choices, and each relationship dictates how to attack the problem at hand. An Assumption question is solved much differently than a Weaken or Parallel question, and those distinctions are crucial to performing well on such a variable test; without a proven strategy for addressing each, the test makers’ unpredictability becomes increasingly insurmountable.

So what, given the guarantee of variety, are you most likely to encounter on test day? Let’s take that same list of thirteen and parse it out numerically from October 2015 through December 2016.

In that time frame there were five released LSATs, consisting of 255 Logical Reasoning questions. Here’s the breakdown (by my count), reordered by appearance:

Trends from the Past Two Years

So while our rough historical estimation of question frequency isn’t far off, notable (divergent) trends emerge. In fact, a few standouts have occurred in just the past two years (since the last time I updated this list).

For one, while Must Be True questions are still undeniably at the heart of the LSAT, they continue to be downplayed in LR. Flaw in the Reasoning questions were the first type to take the top spot from Must, and now we have a new champ: Strengthen.

I noted in my last breakdown that “Strengthen questions appear nearly twice as often as Weaken!” and that statistic surprised a lot of test takers. Lately? Nearly three times as often.  So popular are Strengthen questions the past few years that they were the single most tested type on four of the five tests examined here (all but the October 2015 LSAT, the oldest of this set). If we look at just the last four released exams there were 34 Strengthen questions total, a whopping 17%!

So despite the similarities between Strengthen and Weaken—helping and hurting are closely related, after all—never before has your time been better spent assisting arguments than assailing them.

Related: make sure you’ve got a solid grasp on Cause and Effect reasoning, as it features in the majority of Strengthen (and Weaken) questions! Causality itself appeared in 48 of the questions counted here, which is about 19%. Knowing you’re likely to see it on one question in five is a clear sign that mastery is critical.

And what of our former leader, Flaw? Well, it fell to #2 since we last looked, dropping from 16% to 13%, but it’s still a huge component of your LR score and deserves plenty of attention. Fortunately, students in our courses see significant time spent on Flaw questions and will find their continued emphasis welcome news.

For one, Resolve the Paradox questions are still on the rise, moving from the already impressive 6.2% we saw last time to the even more robust 8.2% here. No test in this grouping had fewer than 3 Resolve questions, and three of the five tests had 5 of them.

To that end, the Second (Help) Family of questions—Strengthen, Assumption, Justify, and Resolve—accounts for 42% of the problems above. That’s a huge number, especially when compared to the relatively meager 21.4% contribution they made from June 2013 to June 2015. Consider that for a second. In the two years leading up to June 2015, Help Family questions were about 1/5 of Logical Reasoning. Since June 2015, their presence has doubled! So hit those four types early and often as you continue with your prep!

Another strong performer was Method—Argument Part. For those unfamiliar, these are the problems where the question stem will repeat a portion of the stimulus and ask you to identify the role that that piece plays in the overall argument (hence, “Argument Part”). Numerically, they accounted for 12 of the total 18 Method questions here, which is quite a feat. They’re also one of the most variable types test-to-test, ranging from total absence in December 2016 (the most recent exam as of this writing) all the way up to 5 in December 2015. Best to play it safe though and prepare as though several will appear on your test.

Point at Issue/Point of Agreement questions, while still on the scarce side, also saw some growth, jumping from 2% in our last analysis to nearly 5% here. Will this question type alone make or break your score? No. But with an average of 2-3 instances per test these too are worth a long look.

And the big “loser”? Well, Must and Flaw both took hits of about 3%, so technically they saw the greatest dropoffs, but I’m going to give the award for most underwhelming to Weaken. Not only did it fall from 6th most common in the two years pre-June 2015 down to 9th place since, but it shows a continued downward trend towards obscurity unmatched by any other type. Not obsolesence, mind you, as your ability to attack questionable reasoning will forever be a cornerstone of LSAT success, but as a singular type (or, for that matter, as an entire Family unto itself) fewer than three per test on average is shockingly scant.

Finally, keep in mind that trends are merely that: observable patterns that reflect the general present, but may prove dismayingly inadequate at predicting both individual exam content as well as long-term test trajectory. I’m confident year-2017 students will find utility in the statistics above, and equally sure a June 2020 test taker will be owed another update. So here’s to a recognized shelf life!

This is undoubtedly one of the most intriguing aspects of this LSAT—how in the world does some obscure, enigmatic committee choose the 100 or so questions that ultimately decide your fate??—so let us know your thoughts in the comments below and we’ll keep working to crack this thing together.