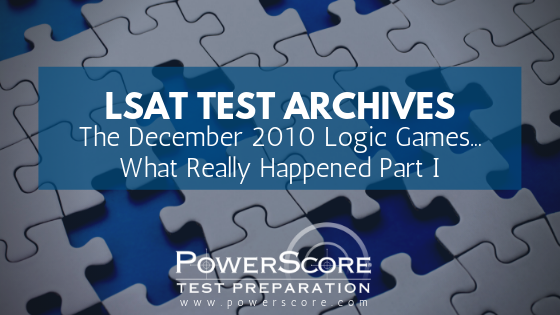 While there seemed to be a near-unanimous feeling among December test takers that the second game (often referred to as the “Stained Glass” game) was the most challenging game on the test—some people even going so far as to cancel their scores based on that game alone—I strongly believe that the toughest game on the December 2010 LSAT was actually the third game, which I’ll call “Management Skills Conference.” Let’s take a quick look at Game 3, why I feel it was the most difficult, and the inferences necessary to conquer it.

This game presents you with five talks—F, G, H, I, and L—to be attended by four people, Q, R, S, and T. Each of these four people goes to exactly two talks, with a maximum of two people per talk, so numerically we have a situation with eight variables (Q, R, S, and T, twice each) being distributed to a five-variable (F, G, H, I, and L) base in groups of 0, 1, or 2. This creates two possible 8 —> 5 partially-fixed distributions:

As is typically the case with numerical distribution-based games, these two distributions are incredibly powerful and ultimately determine a number of inferences about the placement of variables. Test takers who were able to focus on the distributions and understand their implications stood a much greater chance of performing well on this game; test takers who ignored or simply failed to recognize the distributions were almost certainly going to struggle.

But that’s not to say that the difficulty came solely from the distribution element. The rules presented some challenges as well. The first two rules establish a few not laws: Q cannot attend F or H (rule 1), and R cannot attend G or H (rule 2). This means that H is particularly restricted, with only S and T possible, and when you consider the third rule that S and T are separate, then you know that at most H can have only one of S or T. That’s a particularly useful inference, as you can use the H group to determine the proper distribution: if H is empty the other four talks get two attendees each (2-2-2-2-0), and if H has S or T then the 2-2-2-1-1 distribution applies. Also, this means that F, G, H, I, and L all have at least one attendee.

The final two rules are conditional in nature, and operate in a similar fashion to one another. From rule four we know that T 1 —> QT, and from rule five we know that R 1 —> SR. Again, some inferences result from these rules, as follows:

Since Q and T cannot attend F, then either S will attend alone or R will attend and bring S with it (since S goes with R 1). Either way S always attends F.

Filling in S and Q at F and G, respectively, is really useful, and allows you to navigate the questions by focusing on the distribution options and which possibility would apply to a given scenario. Let’s look at a couple of the questions and hopefully you’ll see what I mean.

Question 17. If Q attends L alone, we have the 2-2-2-1-1 distribution. So your other single group (besides L) would be H. That means F, G, and I are all doubles. Your double F group is RS. G must have Q and T (must be T’s 1st since that requires Q, and G is the only talk where Q is in a double for this question). We still have an R, S, and T to place. Since R cannot go to H (rule 2), and I is the only open group left, then R must attend I. The S and T are split between H and I, but since you don’t know their exact placement S at H does not have to be true (could be false; answer D). The distribution 2-2-2-1-1 is F-G-I-H-L.

I imagine you can see how this could all get very confusing and difficult to track without a solid understanding of the two distributions and without some key inferences made early on. The key thing to keep in mind for this game is that when you see numerical uncertainty (the size of certain groups can change or various distributions can be applied) you MUST focus on it as you attack a game. Here, correctly applying the two distributions to specific scenarios is an absolute necessity; by no means do they make this game easy, but they at least make it manageable.